For the Love of the Story

Catriona Smart and her family would often drive to downtown Toronto when she was growing up. Occasionally her friends would come too, everyone squeezed in the back of her family’s Volvo wagon. “Everybody would be used to listening to…the pop music station, but in my house, we listened to…NPR or…CBC,” she says, “And it was always…a very serious topic.”

When Smart was a child, her parents would ask her views on issues like the Israeli-Palestinian conflict after listening to a story on the radio, she says. “My friends would be sitting in the middle, [and] they’d be like, ‘What?’….[My parents] wanted to know our opinion…. It was just natural to us.” Smart was born in Montego Bay, Jamaica then moved to Nova Scotia and finally Toronto as a young child. Her father is Jamaican, her mother Scottish. Smart would visit her grandparents in Jamaica–they owned a small chicken farm and would often put Smart and her siblings to work collecting eggs. Her family would also travel to Scotland to visit family in Dundee where her mother is from.

Growing up, Smart’s parents would take her and her brother and sister downtown every Saturday to visit bookstores. Her parents loved to read and it was important to them that their children read too. “I just loved bookstores. I loved the way they smelled. And I loved collecting. I was really big on reading a book so that I could get a chance to get another one,” she remembers.

I speak to Smart on the phone from her home office in Toronto. Her daughter’s half uneaten chicken and a piece of broccoli sit nearby. A messy book collection that Smart wants to organize lines bookshelves in the walls around her office. She is supposed to be in Capri in a few weeks, but had to cancel due to the COVID-19 pandemic. Right now, “I’m reading Sex and Vanity, the Kevin Kwan book,” she says, “I needed a really good escape.” 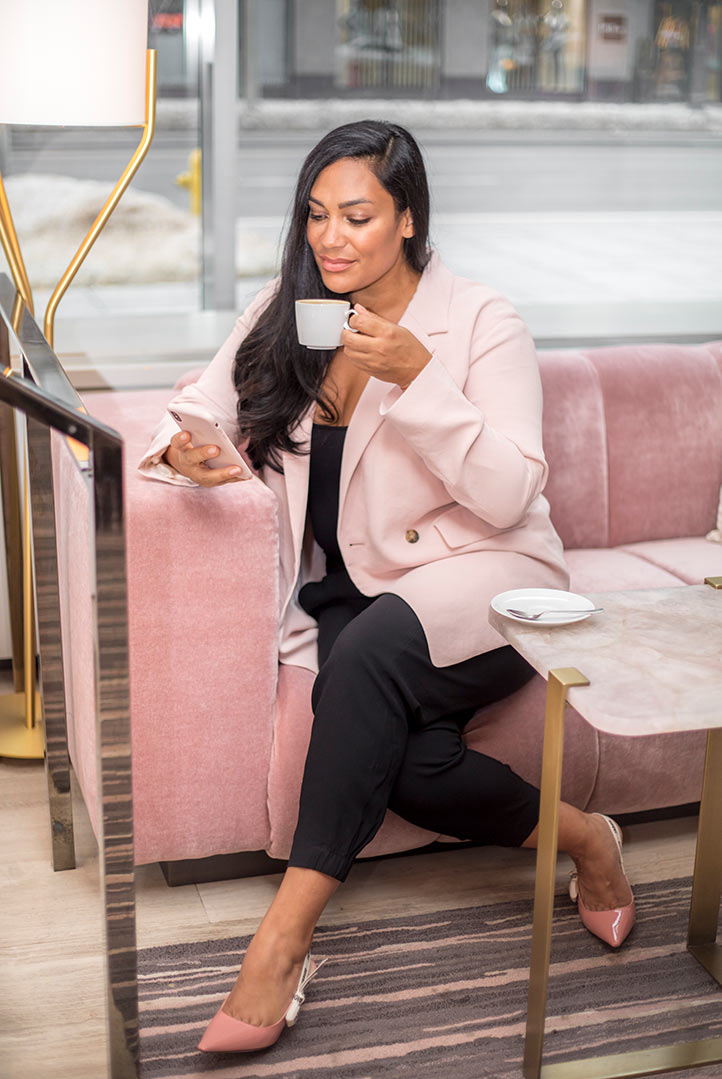 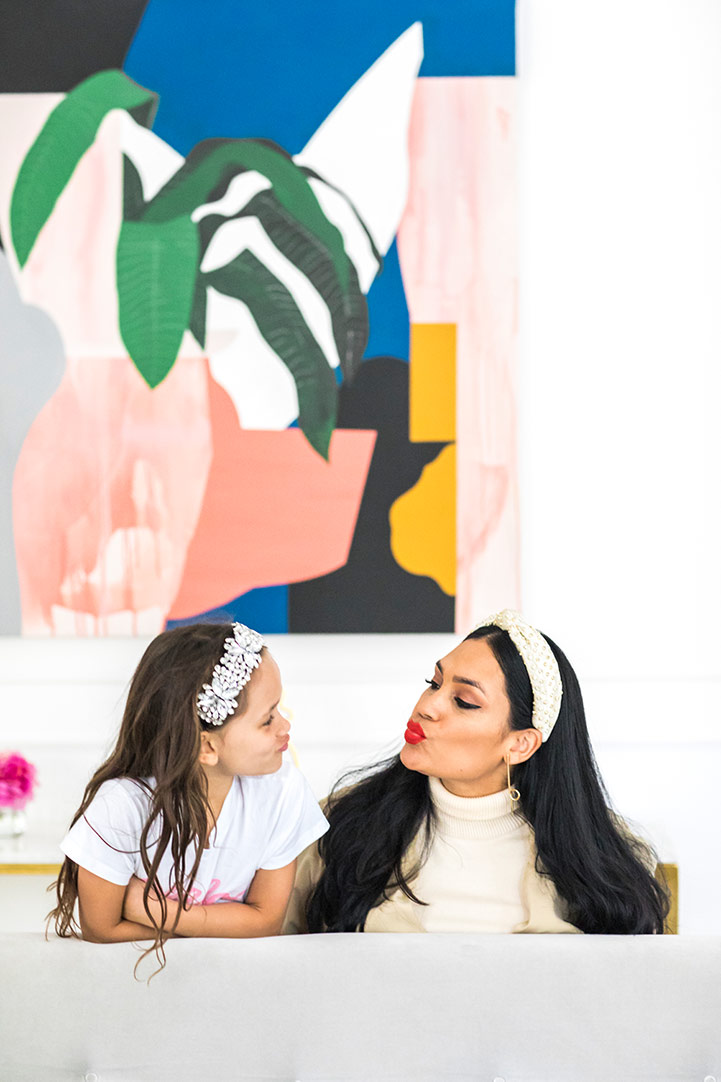 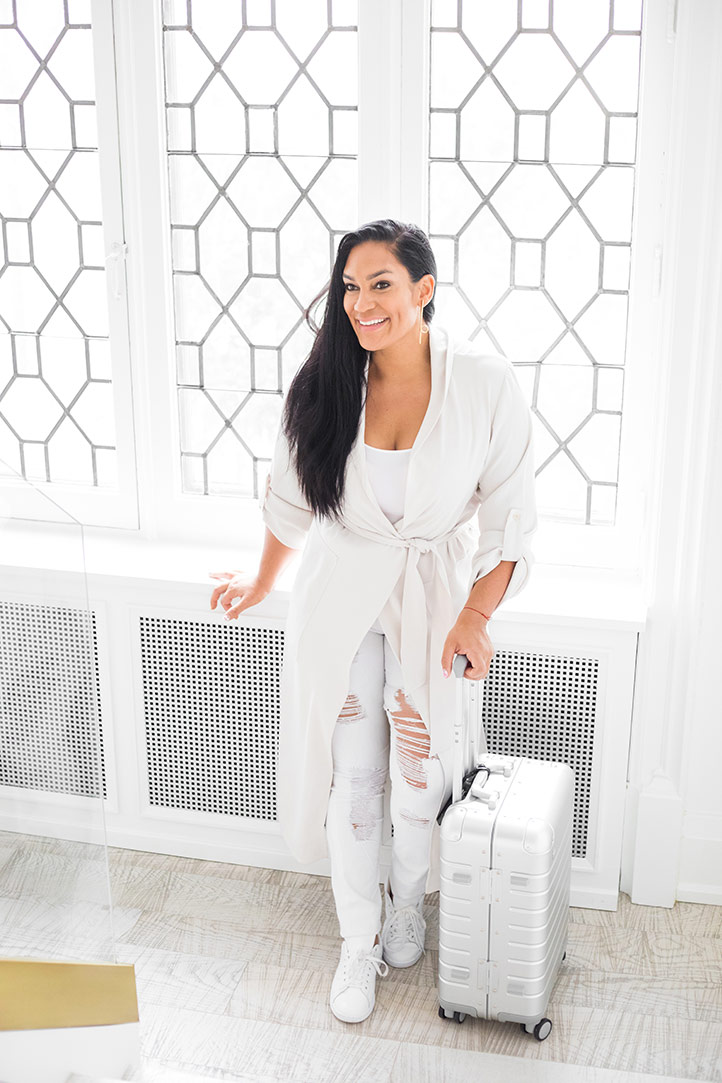 Four years ago, Smart co-founded the PR firm Halo with her business partner. Before PR, when she was just out of college, she worked as a bartender and noticed that it was hard to find clothes you could move in while working, clothes that were sexy and affordable. She started a clothing line called Brazen Hussy and sold pieces out of the coat check to bartenders all over Toronto.

When she decided to stop working in fashion, Smart started writing a blog called Coco & Cowe. She began reaching out to brands that she loved and pitched them ideas for how she could tell their story in a way that people would connect with, rather than just being on a billboard, she says. “I understood telling a story to sell something. So to work with a brand…you really had to have a deep connection with a person, and I understood that, and I loved that part.” From her work bartending, Smart began hosting events in night clubs and restaurants. Soon, her two worlds–storytelling and events–began to meld.

“I think if women reached out and connected more with…other women within their field it would cause…a greater sense of camaraderie within us.”

Since then, Smart has hosted huge events including Chez Rickey for Cointreau, Plant Positivity for Aphria, and Harvest for WeedMD. “I’m very shy,” Smart says. “When it comes to clients…you won’t really be able to tell. People are like, ‘Really you’re shy?’” she says. Smart hosts numerous cocktail parties and events for clients that her company represents. “I ask a lot of questions and I’m very bubbly, but then I’m very tired after,” she says.

At Halo, Smart tells stories and creates brand experiences. “Whenever there’s any kind of creativity behind anything we’re doing that’s what I touch. So whether it’s an Instagram post or it’s an event for 1,000 people, I’m coming up with the concepts that bring it to life,” she says. In addition to Halo, Smart still runs her blog, now called Coco & Cowe and recently launched a podcast, Conversations with Coco + Friends, where she covers everything that affects the modern woman, she says, from motherhood to being a Millennial.

I ask Smart what advice she has for women in the corporate world who are facing issues like sexism in the workplace. “Now more than ever we [women] have the ability to say something and we have the ability to stand up for ourselves,” she says. “People should say something if they feel safe enough to,” Smart says. “If you’re working within a corporation…you do have to document situations that are happening, and I don’t think you should stay silent anymore.”

“I also think that you should seek out women within your field…as mentors and seek them out as allies,” Smart says. “I think if women reached out and connected more with…other women within their field it would cause…a greater sense of camaraderie within us.”